The Claudia and the Helvick connection.

I recall this night quite well, A group of us had finished work in the local leather factory and were heading home up the dark lane way towards Main Street. We observed dark figures darting from doorway to doorway,we remained quite and continued on our journey towards the town square.We realised that they were armed soldiers.

A man known merely as ‘the German’ organised the leasing of the Cyprus-registered boat called The Claudia. Initially, its cargo was to contain 40-tonnes but the Claudia headed out to sea with only a small quantity of five tonnes. The reason for the reduced shipload was that the Libyans were concerned about the ship and its reputation and had done some investigating into its history. They discovered that The Claudia had a notorious international reputation and had been involved in other smuggling operations

It was decided that Joe Cahill and two of his colleagues would make the journey back to Ireland on board the vessel, as this would be their safest route home. The captain was a man by the name of Hans Ludwig Fleugel, and his brother was the first mate.

Of this aspect of the operation Joe Cahill said: “I have no idea what the finer details were that lay behind the acquiring of the ship. What I do know is that we left it entirely up to the German. Our people had met the Libyans before I went out, and it was decided that a boat should be moored outside Libyan territorial waters and the stuff could be transported at sea. After I had met Gaddafi, we arranged that a radio signal from The Claudia, by this time just outside the limits, would let us know when to give the Libyans the go-ahead to head out to sea with the arms.

“When the people on board the Claudia could not make contact, they headed into Tripoli, which they should never have done. It was never intended that the boat would go into Triploi. That was to be the safeguard for the Libyans, but the ship arrived in the harbour and there was a bit of a panic. The Libyans were fair enough. They said they would load the ship where it was. However, for reasons which I did not discover until years later, they did not supply all they said they were going to supply.”

The boat reached the Waterford coast but the republicans were frustrated when they were forced to stay at sea for another 24 hours due to adverse weather conditions. Equally frustrated were the awaiting groups at Helvick Head, watching out for The Claudia. The group on land had trouble of their own, as they were unable to establish radio contact with the vessel due to the same technological difficulties the boat experienced in Libya.

A launch boat had to make numerous trips in and out to sea, watching for sight of The Claudia so that they could safely escort her into the harbour. To explain the trips in and out, the “fishermen” said that they were having engine trouble and were trying to fix the problem. Unfortunately, one local was over helpful and wanted to help fix the engine. The men asked the friendly local man to go and source a new lead for them to keep him out of harm’s way.

The land operation had its headquarters in a house overlooking Helvick Harbour. An Abbeyside man was Officer in Command and there was also an active service unit to escort the arms to dumps. In all, there was a 50-person plus team involved in the onshore operation.

On 28 March the watchers in the harbour spotted The Claudia and the launch was dispatched to meet her. The objective was to bring Clareman Denis McInerney to shore so that he could lead up the land operation by ensuring that the arms were brought to safety, and to bring walkie-talkies on board to establish contact between all parties as radio contact was impossible.

The arms were to be brought in with the help of a trawler and some specially made rope nets, which local Volunteers, who were staying in the house overlooking Helvick Harbour, had put together. These nets were designed to carry the weight of the arms shipment.

The people on board the launch informed the crew that all was clear on shore and there was not even a sign of a customs man around. While McInerney headed back to shore, one of the members of the launch, Gerry Murphy, stayed on board The Claudia.

Seán Garvey from Kerry, Joe Cahill and Gerry Murphy from Waterford were talking about the success of the operation when they noticed three ships from the Irish Naval Service — two minesweepers, Gráinne and Fola, and the fishery protection vessel, Deirdre. These boats had been following the gun smuggling operation. Earlier fears on the part of the republicans about a possible sighting of a submarine in the Mediterranean had been correct, as a submarine was spotted off the Island in Helvick.

With the help of newly-acquired radios The Claudia crew warned the people on the launch of the impending danger. So sudden and unexpected was the appearance of the Navy that the republicans had no chance to carry out a pre-arranged plan to scuttle the ship if there was a danger of the weapons being captured. Enough explosives had been provided to rip open The Claudia’s hull, but they were not in a state of preparedness when the 26-County Navy struck.

The launch quickly tried to get ashore to warn the people waiting there. A package was thrown over the side as it tried to reach land. They were able to contact those on shore through the walkie-talkies that they had brought on board. The Navy vessels opened fire on the launch and numerous tracer bullets were rained down on them. The launch halted only when a rubber dinghy from one of the minesweepers pulled up alongside it and fired two shots at close range.

The people waiting onshore had to abort the operation and set about helping the active service unit to get away. They were escorted through fields to a safe house, where they laid low until things had quietened down a few days later.

The OC waited until a number of people gathered on the pier and headed down, along with a local fisherman, pretending to be an onlooker unaware of what all the fuss was about. The other members of the operation then slipped in the back way to Murray’s pub where a party was taking taking place, as the owners had returned from honeymoon.

The Gardaí and Navy were all around the area. An armoured tank was placed opposite Murray’s pub, with its gun pointing out to sea.

At the same time in Stradbally, a local man out doing a spot of salmon fishing was surrounded by armed Gardaí as he came ashore. He thought they were the bailiffs, while they thought he was involved in the Helvick operation. Once the Gardaí realised the mistake, the sergeant, a man with a thick Cork/Kerry accent, bought one of the fresh fish.

Back in Helvick on the night in question, one of the sharp-eyed Irish sailors had spotted the object being thrown over the side of the launch. A Navy diver was sent down in the following days but came up with nothing.

Local salmon fishermen spotted the mystery object and marked it with a buoy. A trawler then used a grappling hook while passing it and brought it on board. The object, two suitcases tied together with rope, contained a black box, which had great deal of money, £40-£50,000, in it, as well as a list of contact names and addresses throughout Europe. Also inside the box were the false passports, which had been used to go to Libya.

The money would have been a big loss to the IRA if it had fallen into the wrong hands, as it proved very important in organising future operations.

Also inside the cases were three copper plates, which had a man on camelback on them, a statue of the Arc De Triomphe, and a dagger, which Gaddafi had given to Joe Cahill.

These objects never found their way back to Joe Cahill’s possession and can be found in and around the Ring area. Some items of clothing belonging to Joe Cahill were among the contents of the cases. His suit and a pair of shoes were cleaned and brought up to him for his appearance in the Special Court some time later.

The black box containing the money, passports and contact names, was carried up the pier by a crew member of the salmon trawler, known as having no republican connections and straight past the 24-hour guard that had been in place since The Claudia had been caught. This money, the passports and the list of contact details were handed back to the IRA, three weeks after The Claudia incident, in Fraher Field, Dungarvan.

The first journalist on the scene of The Claudia’s capture was John A Murphy, then working for the Cork Examiner, accompanied by photographer Rory Wyley from Dungarvan.

The Claudia was arrested in Helvick and brought to Cobh, where it was searched and unloaded. Much to everyone’s surprise, it was released. Joe Cahill, Seán Garvey and Gerry Murphy were all arrested in Cobh. The crew members of the launch, Ger Walsh and Donal Whelan, along with Denis McInerney, were brought into Helvick Pier and arrested there.

On 21 May 1973, Joe Cahill was sentenced to three years penal servitude. Denis McInerney from County Clare and Seán Garvey from Kerry each received a two-year sentence. Donal ‘Duck’ Whelan and Gerry Murphy, both from County Waterford, received suspended sentences of two years. Ger Walsh was acquitted in the case.

Both Gerry Murphy and Donal Whelan were suspended from their jobs. Gerry Murphy worked for the County Council while ‘Duck’ Whelan was a headmaster in Kilmacthomas Vocational School. He was suspended for seven years. Although his job was continually advertised no one ever applied to fill the position. When the seven years were up, there was one application from ‘Duck’ himself and he was reinstated.

From Youghal to Ring County Waterford, by Bike: : By Mike Hackett

(Mike Hackett on a visit to us in Kilminnion South) An Rinn, Dungarvan agus Garryvoe, Knockadoon were places where the Gaeilge was spok... 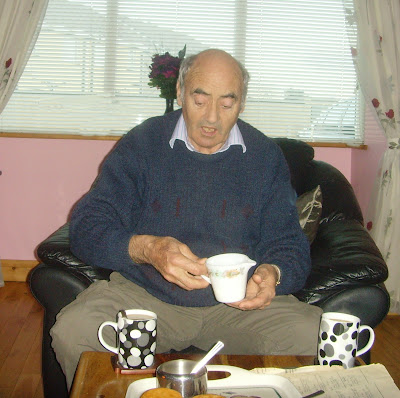 Dungarvan to the Isle of wight Blog

Many people traveled to the Isle of Wight from Dungarvan.
I will add photos to the blog when they are submitted to me.
www.isleofwightdungarvan.blogspot.com
Eddie

Since I commenced the Abbeyside reference archive Blog site, I've had many emails from people with Ring Connections.Each day I get some form of request for information or photos, or a family search. There are many postings to the Abbeyside Blog site that have Ring reference, some of them you will find on here, but if you visit the Abbeyside blog you will find quite a few.
www.abbeysideheritagearchive.blogspot.com .
If you click on the photos, you will get a much larger and sharper image....happy surfing...AND! your comments are always welcome.